This, my first collection of short stories, was published in the UK in 2008 by Beautiful Books – and in the US by Harper Perennial in 2009. It is due out in translation in France in 2014.

It earned a 5-star review in national British newspaper ‘The Independent on Sunday’, and averages 3.9 out of 5 stars on Goodreads.

You can purchase copies of the UK print edition for overland delivery to wherever you are in the world… by visiting the ‘PayPal‘ page on this site.

You can purchase copies of the US print edition from Amazon.com.

’30 utterly original, darkly surreal and dangerously funny tales unfold in the present, past and future in mythic space and the not-quite-ordinary everyday world. In them you will meet a panoply of unforgettable characters, including the ex’s of both God and Death, a dog addicted to cocaine, a couple who literally merge through the intensity of their mutual lust; and another who eat their kids. And of course, the goat that ate its own legs.’

My Goat sings the blues 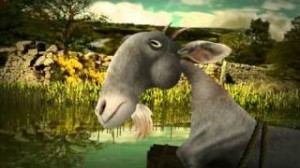 Legless goat dispatched anywhere in the world: £7.99 per copy

Free postage. Surface mail only. Enter dedication below (if required).